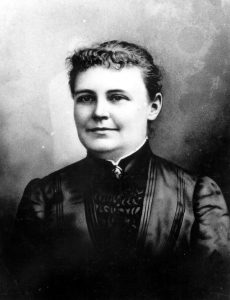 Julia Tuttle was not the kind of person to let what happened to her dictate her life. She discovered that her husband’s debts were far greater than she had ever considered when he passed in 1886, but she worked toward paying them off. She converted their four-story home into a boarding school for young women.

By then, she’s left the high life in Ohio for Florida. She had watched her husband slowly sell off his business assets in an attempt to pay off his debts. Tuttle received some money from her parents estate, which helped to finance the purchase of additional land that added to her small Florida orange grove. The grove grew immensely, but Tuttle struggled to get the crop to market. For that, she needed some infrastructure and decided to try and appeal to Henry Flagler.

Flagler was the owner of the Florida East Coast Railway, and the two sparred on multiple occasions over how to build a line through her local area. Her attempts were ultimately unsuccessful, even after she tried making a personal appeal to him.

Even after Flagler made it clear he was not interested she persisted in attempting to show him the virtues of her land. Weather ended up working to her favor. Florida had its first big freeze, and most of the land was still recovering two years after the snows had melted and the soil had gone to mush. Tuttle’s land had been spared, and she sent a bouquet of flowers from her property to Flagler to let her know the weather was fine. Seeing a business opportunity, he brokered a deal with Tuttle that included some of her land pro bono.

Tuttle’s philanthropic act brought jobs to Miami, kicking off the growth of a cultural center that still exists to this day.